Since this week’s parsha, Eikev, includes the sources for the laws of brochos, it is certainly appropriate to discuss:

Is This Considered a Mixture?

Some Details of the Halachos of Ikar and Tafeil 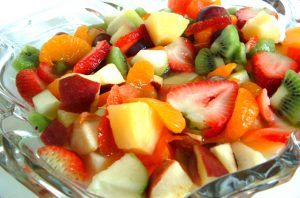 Question #1: What bracha do I recite on a fruit salad?

Question #2: What is the difference between a mixture and an enhancer?

Question #3: Why should I sometimes recite the brachos of ha’adamah or shehakol before I recite the brocha of ha’eitz?

In a different article, Important Eating, I noted that there are two general categories of ikar and tafeil; (1) enhancers and (2) mixtures.

(1) Enhancers: This category includes food items where the tafeil food makes the ikar food tastier. Some common examples include: eating cereal with fruit and milk or latkes with apple sauce; stirring herbal tea with a cinnamon stick; breading fish or meat (schnitzel). In all of these cases, one recites the bracha for the ikar; that is, the cereal, latkes, tea, or meat; and the tafeil is included.

(2) Mixtures: This category includes cases where one food is not specifically enhancing the other, but both foods are important. Examples of this type of ikar and tafeil: macaroni and cheese, blintzes (they always contain a filling), cholent, kugel, stew, soups. These mixtures are considered one complete food item and therefore have only one bracha. Thus, the concept of ikar and tafeil is very different here – it is the rule used to determine which bracha we recite on this food.

WHAT IS A MIXTURE?

Does a “meat and potatoes” roast require one bracha on both ingredients, or is it two items that require separate brachos?

Is the bracha on a mix of raisins and peanuts ha’eitz or ha’adamah?

Is a fruit salad containing melon or pineapple in addition to pears, apples, and peaches a mixture that requires one bracha or separate brachos?

When dealing with the correct bracha on a food mixture, one of the key questions one must ask is whether the food is indeed a mixture that requires one bracha or if it is considered two (or more) separate foods each of which requires a separate bracha.

Here is an obvious example: Suppose you dine on a chicken dinner with side dishes of noodle kugel and string beans. Although you are eating them all at the same time, these foods are not a mixture. Therefore, each item requires its own bracha.

Do the ingredients of a fruit salad that contains both ha’eitz and ha’adamah items require two separate brachos, or is the salad a mixture requiring one bracha? Whereas in a soup, peanut bar, or tzimmes, the foods were cooked or blended together and are difficult to isolate from one another, in most fruit salads the different fruits can be clearly distinguished and separated from one another. On the other hand, because the pieces are small, one usually eats the different varieties together.

(I noted in other articles, entitled “Topical, Tropical Fruits”; “A Sweet Change of Pace”; and “Papaya”, that although we recite ha’adamah on bananas, pineapples, and strawberries, and shehakol before eating chocolate, there are poskim who contend that one should recite ha’eitz on these fruits because they are perennial; that is, the root remains from one year to the next. Because the poskim dispute whether the correct bracha on these types of perennial fruits is ha’eitz or ha’adamah, we recite ha’adamah [and, in the case of chocolate, shehakol] to resolve the doubt. In all of these instances, we recite the more general bracha, because one who recites a ha’adamah when he was to have recited ha’eitz fulfills his obligation, since trees grow from the ground. Shehakol is the most general of all brochos on food, and fulfills the requirement bedei’evid whenever it is recited on any food.

However, since we recite this bracha only to resolve a safek, there are several ramifications of this ruling, one of which directly affects our case. If one will be eating both these fruits [bananas, pineapples, and strawberries] and definite ha’eitz fruits, one should recite the ha’adamah first and taste them before one recites ha’eitz. This is because, according to the opinion that the correct bracha on any perennial is ha’eitz, if one recited a ha’eitz on the tree fruits, reciting a different bracha afterwards on the banana, pineapple, or strawberry is a bracha levatalah, a bracha in vain. Although we do not rule according to this opinion, we should not ignore it.

Similarly, if you are going to recite shehakol on the chocolate, you should recite this bracha first and taste the chocolate before eating the tree fruits. This is because there are halachic authorities who rule that the brocha on chocolate is ha’eitz, as I explained in the above-referenced article, A Sweet Change of Pace.)

The same dispute about making one or two brachos on a mixture exists regarding a mix of raisins and peanuts; most poskim contend that one should recite the bracha of the majority item, and the Chayei Odom rules that they require two separate brachos.

Following the majority opinion that a person recites one bracha on the mixed fruit salad or the peanuts and raisins, we still need to clarify a very important issue. At what point do we consider the two items to be different foods requiring separate brachos? In the case mentioned above of a chicken dinner with side dishes of noodle kugel and string beans, it is obvious that they are different items. But is a roast of meat and potatoes or a shepherd’s pie (usually consisting of alternating layers of ground meat and potatoes) considered one item, or does it require two separate brachos?

The poskim rule as follows: When the two items are eaten together in one spoonful, he recites one bracha, even if there is an occasional spoonful where he is eating only one of them. However, if each spoonful usually contains one item exclusively, the two items should have separate brachos. Thus, meat and potatoes cooked together would have two separate brachos, since the meat and potatoes are usually not eaten together in the same forkful. However, shepherd’s pie or soup would require only one bracha, since each forkful or spoonful will probably contain parts of at least two different foods. In this case, he recites one bracha, even if an occasional forkful/spoonful has only one of the ingredients (Aruch Hashulchan 212:2).

A cholent consisting of barley, kishka, meat, potatoes and beans contains some items whose bracha is mezonos (the barley and kishka) and others whose bracha is shehakol (the meat) or ha’adamah (potatoes and beans). Is cholent a mixture like a soup requiring only one bracha, or can it be compared to eating a meat and potatoes roast, where several brachos are recited on the components? Truthfully, it depends on the consistency of the cholent. If the cholent that includes barley or kishka is made in such a way that each forkful contains a mix of the various ingredients, its bracha is mezonos. However, if the potatoes or meat are large, discernable chunks, they will require their own brachos (Pri Megadim, Pesicha Kolleles, Hilchos Brachos s.v. klal amru; Vezos Haberacha pg. 110).

Not everything we do in life qualifies as our ikar purpose in life; often we must do things that are tafeil to more important things. However, paying attention to the halachos of ikar and tafeil should encourage us to focus on our priorities in life, and not allow the tafeil things we must do become more important than they really are.