Since we all hope to be in a rebuilt Yerushalayim in time for Shavuos, we need to start planning… 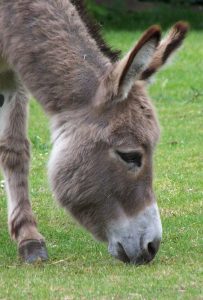 “Someone once told me that when the Beis Hamikdash is rebuilt, the mitzvah of Aliyah Laregel will be optional. How can that be?”

“Why does my shul omit the reciting of Tachanun during the week following Shavuos?”

Question #4: Have I gone nuts?

What do these questions have to do with one another?

When Bilaam’s donkey challenges him for beating her, she uses the following words: Meh asisi lecha ki hikisani zeh shalosh regalim, “What have I done to you, that you struck me three times!” (Bamidbar 22:28). The donkey does not use the common word for “times,” pe’amim, but the word regalim, which is unusual, even for a donkey. The Midrash Rabbah, quoted by Rashi, notes that the donkey was hinting to Bilaam, You are trying to destroy a nation that celebrates every year three regalim, alluding to the three times a year, Pesach, Shavuos, and Sukkos, when the Jewish people will fulfill the mitzvah of ascending to the Beis Hamikdash grounds, referred to as the mitzvah of Aliyah Laregel. This same idea is also borne out by the posuk in Shir Hashirim (7:2), Mah yafu fe’amayich bane’alim bas nediv, “How beautiful are your footsteps when you wear sandals, daughter of nobles,” which the Gemara explains as referring to the beauty of Klal Yisroel ascending to Yerushalayim to fulfill the mitzvah of Aliyah Laregel (Sukkah 49b; Chagigah 3a).

This mitzvah is described several times in the Torah. In Parshas Mishpatim (23:17), the Torah says, “Three times during the year, all of your males shall be seen (yeira’eh) before the Face of the Master, Hashem.” This theme of “being seen” by Hashem is repeated twice in Parshas Ki Sisa (34:23-24). The first posuk is virtually identical to the one cited above, while the second one reads: “No person shall desire your land when you ascend to be seen (leira’os) before the Face of Hashem, your G-d, three times a year.” There is yet another posuk in Ki Sisa (34:20) that also mentions the concept of “seeing”: “They shall not be seen (yeira’u) before My Face empty-handed.” Hence, the name of the korban offered when one ascends to the Beis Hamikdash grounds is olas re’iyah.

The Rambam writes (Hilchos Chagigah 1:1) that there is a positive command to come to the Beis Hamikdash during the regel and bring the olas re’iyah. One who comes but does not bring this korban, does not fulfill the mitzvas asei, and also transgresses a lo sa’aseh, “they shall not be seen before My Face empty-handed.”

The Sefer Hachinuch (Mitzvah #88) explains the significance of bringing the olas re’iyah: He writes that it is not proper to come before the King empty-handed. Although Hashem Yisborach has no need for our gifts, nevertheless, it is meant to teach us that, just as a person who has an audience with a mortal king would certainly bring a gift, we must be cognizant that we are coming to stand before The King.

Details of the mitzvah

In addition to the olas re’iyah that we just mentioned, other offerings are offered, including those called shalmei chagigah. Both the olas re’iyah and the shalmei chagigah should be offered on the first day of Yom Tov, unless it is Shabbos. If one failed to bring them that day, it is permitted to offer them during chol hamoed or even the last day of Yom Tov. This is true even on Sukkos – meaning that, even though Shemini Atzeres is a Yom Tov separate from Sukkos, regarding the laws of offering the special Yom Tov korbanos, it is considered part of Sukkos. Therefore, one who failed to bring the olas re’iyah or the Chagigah on the entire Sukkos, could still offer it on Shemini Atzeres.

In the case of Shavuos, one who failed to offer these korbanos on the holiday itself fulfills the mitzvah if he offers the korban after Yom Tov, provided he does so within six days after Shavuos is over.

Although we cannot observe Aliyah Laregel until the Beis Hamikdash is rebuilt, many halachic observances result from the laws associated with this mitzvah.

Some communities have the custom not to recite Tachanun during the week after Shavuos. Their logic is that since, at the time of the Beis Hamikdash, one would be able to offer shalmei simcha on these days, those who follow this custom consider it inappropriate to recite the solemn prayer of Tachanun on such a happy occasion, similar to the practice of skipping Tachanun on Rosh Chodesh and when a choson is in attendance. We can therefore now provide the answer to the third of our opening questions: “Why does my shul omit the reciting of Tachanun during the week following Shavuos?”

At this point, let us examine the first of our opening questions: “Someone once told me that when the Beis Hamikdash is rebuilt, the mitzvah of Aliyah Laregel will be optional. How can that be?”

The person who contended this may have been basing himself on the following statement of Chazal: mefunak people are exempt from the mitzvah of Aliyah Laregel. Who qualifies as mefunak? Rashi explains that someone who usually walks with shoes is exempt from Aliyah Laregel, since one is not permitted to walk on Har Habayis while wearing shoes. The Rambam (Hilchos Chagigah 2:1) explains the Gemara a bit differently: someone who is unused to walking very far and, therefore, cannot climb to the Har Habayis is exempt.

Another possibility is that he was assuming that only someone who owns land in Eretz Yisroel is obligated in Aliyah Laregel (Pesachim 8b; see Mishneh Lamelech, Chagigah 2:1).

Either approach does not mean that the mitzvah of Aliyah Laregel will be optional, only that, many people will be exempt from fulfilling it should they not want to. There are and definitely will be people who own land in Eretz Yisroel, and there are also people who are capable of walking the way the Rambam describes. Furthermore, even should one want to follow Rashi’s broader definition that exempts someone who does not usually walk without shoes on, there are people who can and do walk around without shoes, and they will be obligated to fulfill the mitzvah of Aliyah Laregel.

Women are exempt from observing the mitzvah of Aliyah Laregel, meaning ascending to the Beis Hamikdash and offering the korban olah, although they certainly will be permitted to observe it, similar to their observing sukkah, shofar, esrog and other timebound mitzvos from which they are exempt. It is a dispute in the Gemara whether they are required to be partners and participants in the offering of the shalmei simcha. Part of this question is whether women are obligated to observe the mitzvah of celebrating Yom Tov or if they are exempt from the requirements of making sure that they have these korbanos, while it is a husband’s responsibility to see that his wife enjoys Yom Tov. The Rambam and the Raavad appear to disagree which approach should be accepted as normative halacha. The Rambam rules that women are obligated in the mitzvah of celebrating Yom Tov while the Raavad rules that they are not (Hilchos Chagigah 1:1).

At this point, let us examine the second of our opening questions: “If a woman forgot Yaaleh Veyavo in bensching of Yom Tov, does she repeat the bensching?”

Not all authorities agree with Rabbi Akiva Eiger’s conclusion that women are exempt from eating bread on Yom Tov. An early authority who did not hold this way is the Pri Megadim (Eishel Avraham 325:11), who mentions, in passing, that both men and women are obligated to eat bread on Yom Tov. Other authorities who agree with this position understand that women are obligated in any and all mitzvos that Chazal established on Shabbos or Yom Tov to make these days special (Shu”t Shoeil Umeishiv, 2:2:55), which includes all the responsibilities of kavod Yom Tov, including eating a bread meal.

The dispute between these halachic authorities results in the following: Should a woman forget to recite Yaaleh Veyavo during the bensching after the Yom Tov meals, according to Rabbi Akiva Eiger she is not required to repeat the bensching, whereas according to the Pri Megadim and the Shoeil Umeishiv, she is.

In parshas Ki Sissa, the Torah notes: “Three times a year, all your males shall appear before Hashem, the Master, the G-d of Israel. When I drive out the nations from before you, and I broaden your territories, no man will covet your land when you ascend to see Hashem your G-d three times a year.” The Torah here provides a solemn promise. The mitzvah of Aliyah Laregel is one of the mitzvos that proves the Divine origin of the mitzvos. No human would dare create a mitzvah that requires all of a nation’s men to be together in one place at one time, and certainly not at an internal point of the country! Who will provide military security on the periphery, at the places where a nation is threatened by its enemies? Only Hashem could promise that when the Jews observe the Torah according to His instructions, none of our enemies will even think of creating difficulties for us, and certainly not consider performing any acts of terrorism or an invasion. Thus, indeed, we understand the beauty of what the donkey was explaining to Bilaam: “Do you understand the sanctity of this nation that you seek to curse? Do you understand the special relationship that they have with Hashem?” Indeed, it would behoove the nations of the world today to listen to the donkey!