Aside from our parsha teaching of the very first Shabbos, the brocha upon fire is recited motza’ei Shabbos because we then regain its use. This definitely provides reason to discuss:

The Melachah of Setting Fires 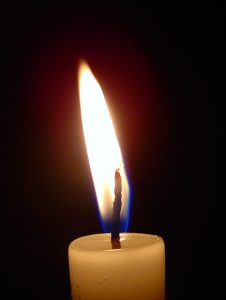 Question #1: Why the pasuk?

“Why does the written Torah mention specifically that we may not kindle a flame on Shabbos?”

Question #2: Out of order

“Why does the Mishnah mention that extinguishing, mechabeh, is a melachah, before it mentions that kindling, mav’ir, is a melachah? One must kindle a fire before one extinguishes it!”

Question #3: Bothered by a blech

“Why must we use a blech on Shabbos?”

All three of the above questions involve laws that result from the Torah’s prohibition against kindling fires on Shabbos; lo seva’aru eish bechol moshevoseichem beyom hashabbos, “Do not kindle fire in all your places of residence on Shabbos” (Shemos 35:3). The Torah prohibition includes not only kindling a flame, but adding fuel or stoking a fire, so that it burns better. Similarly, adjusting the wick of a burning lamp on Shabbos so that it produces clearer light also violates the Torah’s prohibition.

Hav’arah is counted by the Mishnah as one of the 39 melachos. This melachah was performed during the construction of the Mishkan when they built fires under the pots used to create the vat dyes required for the curtains and the vestments of the kohanim (Rashi, Shabbos 73a s.v. mechabeh).

Why a special pasuk?

There is a question here: Why does the written Torah mention, specifically, that we may not kindle a flame on Shabbos? Other melachos are not singled out with a special mitzvah in the written Torah.

The Gemara (Shabbos 70a) records a dispute between tanna’im why the written Torah especially mentions the melachah of hav’arah. Rabbi Yosi rules hav’arah lelav yatzas, meaning that hav’arah is singled out to mitigate it. Whereas the other melachah prohibitions of Shabbos are capital offenses, hav’arah is a somewhat lesser Torah transgression, only a regular lo saaseh. (Certainly, we should treat it with full seriousness, even according to Rabbi Yosi. The difference in practical halachah is that, according to Rabbi Yosi, one who violated hav’arah negligently does not bring a korban chatas as atonement, whereas someone who transgressed negligently one of the other melachos does.)

Rabbi Nosson disagrees with Rabbi Yosi, contending that kindling is considered a regular melachah of Shabbos like all the others, but that hav’arah lechaleik yatzas, hav’arah is singled out to teach that the 39 melachos of Shabbos are considered 39 different prohibitions. This means that someone who violated more than one melachah on a single Shabbos is punished as if he had violated several prohibitions of the Torah. He might be required to offer more than one chatas offering.

The accepted halachah follows Rabbi Nosson, that kindling is considered a regular melachah of Shabbos.

Although we are all aware that it is prohibited to kindle or to increase a flame on Shabbos, we may not realize that many of the regulations that we observe on Shabbos were established by Chazal out of concern that someone not violate the prohibition of hav’arah. For example, the reason that we use a blech to warm food on Shabbos or to keep it warm is because Chazal prohibited using an open fire for these purposes. This would involve two different rabbinic prohibitions, that of chazarah, returning food to a fire on Shabbos, and shehiyah, leaving food to cook or keep warm from before Shabbos on an open flame. Chazal prohibited shehiyah because of concern that someone might mistakenly stoke coals. According to some authorities, the prohibition of chazarah was also so that someone warming his food on Shabbos not err and inadvertently stoke the coals of the flame. Similarly, Chazal prohibited hatmanah, wrapping or insulating hot food before Shabbos in a way that increases the heat on Shabbos. All of these are prohibited because of concerns that one may mistakenly stoke a flame on Shabbos (Shabbos 34b; Tosafos, Shabbos 36b s.v. lo).

Chazal also prohibited reading or doing other activities involving detailed work by the light of an open flame on Shabbos, because of concern that one will adjust the flame (Rashi, Mishnah Shabbos 11a). For this reason, on Shabbos, one may not use an oil lamp to assist choosing between two items of clothing that look similar (Shabbos 12a), or use it to check tzitzis (Magen Avraham 275:1).

Chazal permitted using oil lamps on Shabbos when they were not concerned that someone might errantly adjust the light. For example, they permitted two people to read the same text together by oil lamp, reasoning that each would pay attention that his partner not inadvertently adjust the flame (Shabbos 12b). Similarly, even in situations when it is prohibited to use a lamp for meticulous work, one may appoint a shomer to make sure that one does not adjust the flame by mistake. This shomer must be someone who is not currently doing any meticulous work – otherwise, we are concerned that he, himself, may forget his job as shomer.

There are a few other instances in which Chazal permitted reading on Shabbos using the illumination of an open oil lamp: One may read the Mishnah of the second chapter of Shabbos, Bameh Madlikin, which describes these concerns. Since the chapter itself emphasizes these laws, it serves as a reminder to be careful (Shulchan Aruch, Orach Chayim 275:7). Similarly, accepted practice was to allow people to read from a machzor on Yom Kippur by lamplight, since the fear of Yom Kippur will remind a person not to errantly adjust the lamp (Shulchan Aruch, Orach Chayim 275:8).

Indeed, we find a dispute among early authorities whether one may read by candlelight on Shabbos, some contending that it is unlikely that someone would mistakenly adjust this lighting (Hagahos Ashri, Shabbos 1:27; Beis Yosef, Shulchan Aruch and commentaries, Orach Chayim 275; Taz, Orach Chayim 278). The prevalent custom is to be lenient (see Biur Halachah 275:1 s.v. le’or). Therefore, we may certainly be lenient regarding electric lights, although there are individuals who follow a stringent position even in this regard. Those who follow this stricter approach assign someone to be the shomer of the Beis Medrash – his job is to not learn and to be responsible that no one inadvertently try to adjust the lights.

We find a very interesting dispute between acharonim concerning what is the definition of the melachah of mav’ir: is it the increase of the fire or is it the consumption of fuel? Some contend that the melachah is the creation or increase of the fire or flame (Graz, Orach Chayim 495 in Kuntros Acharon), whereas others dispute this analysis and define the melachah as the consumption of fuel that transpires when a flame burns (Shu”t Avnei Neizer, Orach Chayim 238:8). Although this dispute seems like a theoretical and almost philosophic debate, there seems to be a difference in halachah that is contingent on this dispute. Does heating metal to a glow involve the melachah of hav’arah? If hav’arah is defined as the consumption of fuel, then the heating of metal, which does not create any noticeable destruction of fuel, should not violate hav’arah. On the other hand, if hav’arah is defined as the increase of a flame, then heating metal should violate hav’arah.

This dispute could then affect what melachah is involved when turning on an incandescent light. According to those who consider heating metal to be bishul, then this would violate bishul, whereas according to those who categorize heating metal as hav’arah, then turning on an incandescent light is included under the melachah of hav’arah. There are a few practical differences that result from this dispute, but, unfortunately, explaining this will take us far afield from our topic. (This is without getting involved in the separate dispute as to whether use of electricity violates the melachos of either boneh [constructing] or makeh bepatish [completing an item].)

At this point, let us explain the second of our opening questions:

Among the various standard commentaries, I found two approaches to answer this question . The Meiri explains that when preparing a vat dye, you sometimes need to lower the flame so that the dye does not burn and then you need to increase the size of the fire afterwards. Lowering such a flame on Shabbos would violate extinguishing, and increasing the heat of the fire afterwards is included under the Torah’s prohibition of mav’ir. Since the preparation of dye in the construction of the Mishkan involved extinguishing before kindling, the Mishnah mentions the two melachos in this order. (An alternative answer is mentioned by the Tiferes Yisroel in his Kalkeles Shabbos introduction to Mesechta Shabbos, Meleches Mav’ir #37).

Rav Samson Raphael Hirsch (Shemos 20:10) notes that people mistakenly think that work is prohibited on Shabbos in order that it should be a day of rest. He points out that the Torah does not prohibit doing avodah, which connotes hard work, but melachah, which implies purpose and accomplishment. Shabbos is a day that we refrain from constructing and altering the world for our own purposes. The goal of Shabbos is to allow Hashem’s rule to be the focus of creation, by refraining from our own creative acts (Shemos 20:11).