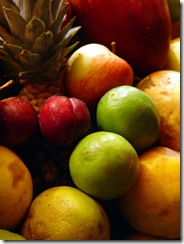 In honor of the month of Shvat, and a bit before Tu Beshvat, I decided to send an article that explains the halachos of the bracha Hanosein rei’ach tov ba’peiros “He who bestows pleasant fragrances in fruits.” Many authorities prefer the version Asher nasan rei’ach tov ba’peiros, in past tense, “He who bestowed pleasant fragrances in fruits” (Eliyah Rabbah 216:5; Mishnah Berurah 216:9).

Here are some curious questions about this bracha that we need to resolve:

1.  Do we recite this bracha on a food that is not a fruit?

3. If I am eating a fragrant fruit, do I recite a bracha when I smell it while I am eating it?

4. Do I recite this bracha when smelling a delicious cup of coffee or a freshly-baked pastry? After all, the coffee bean is a fruit, and the flour of the pastry is a grain, which is also halachically a fruit. As we will see, the answer to this question is not so obvious.

The Gemara (Berachos 43b) teaches that someone who smells an esrog or a quince should first recite Hanosein rei’ach tov ba’peiros.

Question: Why did Chazal institute a unique bracha for aromatic fruits?

Answer: Whenever one benefits from this world one must recite a bracha. Thus, Chazal instituted brachos that are appropriate for fragrances. However, all the other brachos on fragrance are not appropriate for smelling fragrant foods, since the other brachos praise Hashem for creating fragrances, whereas esrog and quince are not usually described as fragrances, but as foods that are fragrant. Therefore, Chazal established a special bracha for aromatic fruits (see Beis Yosef, Orach Chayim end of Chapter 297).

It is noteworthy that although quince is still considered a fruit for the purpose of this bracha even though it is not edible raw. More on this question later…

DO WE RECITE THIS BRACHA ON FRAGRANT FOODS THAT ARE NOT FRUITS?

This leads us to a fascinating halachic discussion with a surprising conclusion.

A BRACHA ON SMELLING BREAD?

(Incidentally, the Rama’s ruling teaches a significant halacha about the rule of safek brachos li’kula, that we do not recite a bracha when in doubt. Although one may not recite a bracha when in doubt, one also may not smell a fragrance or taste a food without reciting the bracha because that would be benefiting from the world without a bracha. This halacha applies whenever someone has a doubt about reciting a bracha.)

WAKE UP AND SMELL THE COFFEE!

As we have discussed, although some poskim (Avudraham and Orchos Chayim) limit the bracha of Hanosein rei’ach tov ba’peiros to fruits, other poskim contend that this bracha should be recited before smelling any fragrant food. This dispute influences the next discussion.

Spices that are used to flavor but are themselves never eaten, such as bay leaves, are not considered a food. For this reason, there is no requirement to separate terumos and maasros on bay leaves even if they grew in Eretz Yisroel (Tosafos Yoma 81b; Derech Emunah, Terumos 2:3:32). A seasoning that is never eaten by itself, but is eaten when it is used to flavor, such as cinnamon, oregano, or cloves is questionable whether it is considered a food, and we separate terumos and maasros without a bracha; if eaten by itself, it does not recite a bracha of borei pri ha’eitz or borei pri ha’adamah (Shulchan Aruch, Orach Chayim 202:16). What bracha do we recite before smelling a seasoning?

CINNAMON, SPICE AND EVERYTHING NICE

What bracha does one recite before smelling cinnamon?

AND THE LEMON SMELLS SO SWEET!

But the fruit of the poor lemon is impossible to eat! Is the bracha before smelling a lemon Hanosein rei’ach tov ba’peiros because it is after all a fruit, or do we recite a different bracha since it is too bitter to eat by itself?

Some poskim rule that one should recite Hanosein rei’ach tov ba’peiros before smelling lemons (Ginas Veradim 1:42; Yalkut Yosef 216:7), whereas others contend that one should recited Borei minei besamim before smelling a lemon, treating the lemon as a safek as to whether it is considered a fruit or not (Ketzos Hashulchan 62:9 in Badei Hashulchan).

An alternative approach is that an esrog is a fruit because it can be made edible by adding sugar. However according to this reason, a lemon should also be considered a fruit, since one can eat candied lemon, which I presume would require the bracha of Borei pri ha’eitz (Vezos Ha’beracha pg. 366). Similarly, some people eat the slice of lemon they used to season their tea, and lemon is also eaten as a pudding or pie filling. I presume that the bracha on these items when eaten alone would be Borei pri ha’eitz. The fact that lemon cannot be eaten unsweetened should not affect what bracha we recite before eating or smelling lemon just as the bracha before smelling fresh quince is Hanosein rei’ach tov ba’peiros even though it is also not edible raw.

Furthermore, we noted above that Chazal instituted the bracha Hanosein rei’ach tov ba’peiros on fragrant fruits and foods because one cannot recite a bracha on them by calling them fragrances. Few people would describe lemon as a fragrance, but as a fruit.

Because of these reasons, I believe the bracha before smelling a lemon should be Hanosein rei’ach tov ba’peiros, but I leave it for the individual to ask their rav a shaylah.

Incidentally, the correct bracha to recite before smelling citrus blossoms or flowers is Borei atzei besamim, since the flower is not edible.

As a side point, one should be very cautious about eating esrog today. Esrog is not a food crop and it is legal to spray the trees with highly toxic pesticides. Because of the rule of chamira sakanta mi’isurah (the halachos of danger are stricter than that of kashrus), I would paskin that it is prohibited to eat esrogim today unless the owner of the orchard will vouch for their safety. Thus, although Aunt Zelda may have a great recipe for making esrog jam, substitute lemon or lime instead. Incidentally, the bracha on eating lemon jam should be Borei pri ha’eitz, which is additional evidence that the bracha before smelling a lemon is Hanosein rei’ach tov ba’peiros.

There is a major shaylah in halacha whether one may smell one’s esrog and hadasim during Sukkos. I have written a separate article on this subject.

EATING AND SMELLING A FRUIT

If I am eating a fragrant fruit, do I recite a bracha before I smell it even though I am not deliberately trying to?

One does not recite the bracha on fragrance if one is picking up the fruit to eat and happens to smell it at the same time (Shulchan Aruch, Orach Chayim 216:2). However, if one intends both to smell the food and also to eat it, then it would seem to be a question of dispute whether one should recites both brachos, Borei pri ha’eitz and Hanosein Rei’ach Tov ba’peiros. This issue is dependent on a dispute between poskim whether one recites a bracha on a fragrant item that is intended to be used for another purpose. I analyzed this subject in a different article in which I discussed when one should not recite a bracha before smelling a fragrance.

WHICH BRACHA SHOULD I RECITE FIRST?

Many poskim state that the custom today is to not make a bracha on smelling a fruit unless it has a pronounced aroma (see Vezos Haberacha pg. 174). For this reason some hold that one should not make a bracha when smelling an apple since apples are often not that fragrant, but one could recite a bracha when smelling guava which is usually much more aromatic. (However, note that Rambam and Mishnah Berurah [216:8] mentions reciting a bracha before smelling an apple, although it is possible that the apples they had were more fragrant than ours.)

The Gemara (Berachos 43b) teaches “How do we know that one must recite a bracha on a fragrance, because the pasuk (Tehillim 150:6) says, ‘Every neshamah praises Hashem,’ – What exists in the world that the soul benefits from, but not the body? Only fragrance.”

Although the sense of smell provides some physical pleasure, it provides no nutritional benefit. Thus, smell represents an interface of the spiritual with the physical. Similarly, we find that we are to offer korbanos as rei’ach nicho’ach, a fragrance demonstrating one’s desire to be close to Hashem. We should always utilize our abilities to smell fragrant items as a stepping stone towards greater mitzvah observance and spirituality.

The author acknowledges the tremendous assistance provided by Rabbi Shmuel Silinsky for the horticultural information used in researching this article.