Admin note: We apologize for the delay in sending out this article. We are having a small problem with our server. However, it is still relevant for the remainder of this week. 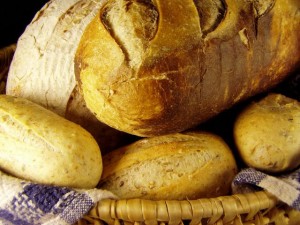 “Which is the better way to thank Hashem for a personal salvation, by reciting birchas hagomeil, or by making a seudas hodaah?”

“Why is the korban todah accompanied by so many loaves of bread and so much matzoh?”

Although Chapter 100 of Tehillim is known by its opening words as Mizmor Lesodah, there actually are two different chapters of Tehillim, #100 and #107, that devote themselves to the thanksgiving acknowledgement of someone who has survived a major physical challenge. In Psalm 107, Dovid Hamelech describes four different types of treacherous predicaments: traveling through the desert, traveling overseas, illness, and imprisonment, in which a person would pray to Hashem for salvation. When the person survives the travails and thanks Hashem, the following passage reflects this thanks, Yodu lashem chasdo venifle’osav livnei adam, “they acknowledge thanks to Hashem for His kindness and His wondrous deeds for mankind.” These words are repeated four times, once after each of the situations is described.

The Gemara cites this Psalm as the source for many of the laws of birchas hagomeil, the brocha we recite when surviving these calamities. Actually, someone who survived these predicaments should offer a korban todah, which is described in parshas Tzav. The birchas hagomeil is recited in place of the korban todah that we cannot bring, since, unfortunately, our Beis Hamikdash lies in ruin (Rosh, Brachos 9:3; Tur, Orach Chayim 219).

What are the unusual features of the korban todah?

The korban todah is a specialized variety of shelamim, whose name means, according to the Toras Kohanim, that it creates peace in the world, since the owner, the kohen and the mizbeiach (the altar) all share in consuming it (quoted by Rashi, Vayikra 3:1). A shelamim, which was perhaps the most common korban in the Beis Hamikdash, was offered to express the desire to draw closer to Hashem from a sense that one lacks nothing in his physical life (see Commentary of Rav Hirsch, Vayikra 3:1).

The korban todah is offered following the general procedures and rules of a shelamim; however, it has several unique features. The first is that the korban itself is accompanied by a huge amount of bread, called korbanos mincha (plural, menachos), a total of forty loaves. Thirty of these comprise ten loaves each of three varieties of matzoh. However, the remaining ten loaves are highly unusual: first of all they are chometz, and this is the only instance of a private korban that includes chometz. (There is only one other korban any time that is chometz, and that is the two loaves offered by the community on Shavuos.) As a result, the korban todah could not be offered on Erev Pesach or on Pesach itself.

The chometz loaves are unusual in another way, in that each of them is three times the volume of the matzoh loaves (see Menachos 76b). Thus, the ten chometz loaves were, together, of equal size to the thirty matzohs.

Of the four varieties of mincha that accompany the korban todah, one of each type of loaf is given to the kohen to take home and consume together with his family and friends. The other 36 loaves are given to the offerer of the korban.

There is another unusual facet of the korban todah offering. Whereas a korban shelamim may be eaten until nightfall of the next day after it is offered, the korban todah must be eaten before the morning after it was offered, a much shorter period of time. Chazal further shortened the time it may be eaten — permitting it to be eaten only until halachic midnight — to assure that no one eat the korban when it is forbidden.

Thus, there are two ways in which the korban todah is treated differently from an ordinary shelamim: The todah is accompanied by an absolutely huge amount of bread, made from a total of twenty isronim of flour, which is twenty times the amount of flour that requires one to separate challah. Half of this bread is chometz and half matzoh, and it must be consumed within a very short period of time.

Why would the Torah “impose” these additional requirements on the offerer of the korban? Well, let us figure out what is he going to do. He has a significant amount of holy meat that must be eaten by midnight, and a huge amount of accompanying bread with the same restrictions. What will he do?

Presumably, he invites a large crowd to join him in his feast and thereby explains to them the reason for his repast. Thus, we increase the appreciation of others for the thanksgiving that Hashem has provided him. This now leads us directly into our discussion of the chapter of Tehillim that begins with the words Mizmor Lesodah.

Whereas the above-mentioned Chapter 107 of Tehillim describes the background behind korban todah and birchas hagomeil, the 100th chapter of Tehillim, Mizmor Lesodah, represents the actual praise that the saved person recites. Although only five verses long, this psalm, one of the eleven written by Moshe Rabbeinu (see Rashi ad locum), captivates the emotion of a person who has just survived a major ordeal. The first verse expresses the need for everyone on Earth to recognize Hashem, certainly something that conveys the emotions of someone very recently saved from a major tribulation. The second verse shares the same passion, since it calls upon everyone to serve Hashem in gladness and to appear before Him in jubilation. The third sentence continues this idea. In it, the thankful person who has been saved calls on everyone to recognize that Hashem is the personal G-d of every individual, and that we are His people and the sheep of his pasture. He then calls on all to enter into Hashem’s gates and His courts, so that we can thank and bless Him. We should note that the gates of the Beis Hamikdash were meant for all of mankind, not only the Jewish People, as specifically included in Shlomoh Hamelech’s  prayer while inaugurating it (Melachim I 8:41-43).

The closing sentence is also very significant: “For Hashem is good, His kindness is forever, and our trust should be placed in Him in every future generation.” (We should note that the word olam in Tanach means “forever” and never means “world,” which is a meaning given to this word by Chazal. The most common Tanach word for “world” is teiveil; see, for example, Tehillim 19:5; 33:8; and 90:2; all of which are recited during the pesukei dezimra of Shabbos and 96:10, 13; 97:4; 98:7, which are part of kabbalas Shabbos.) The celebrant calls upon those he has assembled to spread the message that Hashem is the only Source of all good, and that we should recognize this at all times, not only in the extraordinary situations where we see the manifestation of His presence!

We can now understand better why the Mizmor Lesodah chapter of Tehillim is structured as it is. It provides the beneficiary of Hashem’s miracle with a drosha to present at the seudas hodaah that he makes with all the bread and meat that he does not want to go to waste — complete with encouragement to others to internalize our thanks to Hashem.

Clearly, then, this psalm was meant to be recited by the thankful person, and this is his invitation to others to join him as he thanks Hashem. The Avudraham notes that Hashem’s name appears four times in the psalm, corresponding to the four people who need to thank Him for their salvation.

We find a dispute among early authorities whether one should recite Mizmor Lesodah on Shabbos (Shibbolei Haleket, quoted by Beis Yosef, Orach Chayim 281). Why should this be?

Since the korban todah is a voluntary offering, it cannot be offered on Shabbos. The Tur mentions that established custom is to omit Mizmor Lesodah on Shabbos and Yom Tov, out of concern that when the Beis Hamikdash is rebuilt, someone may mistakenly offer the korban todah on these days. On Shabbos, of course, it is prohibited to offer any korban other than the required daily tamid and the special Shabbos korbanos, whereas on Yom Tov one may offer only korbanos that are brought because of Yom Tov (Beitzah 19b).

The Tur does not agree that this is a valid reason to omit reciting Mizmor Lesodah on these days, contending that we need not be concerned that people will mistakenly offer a korban todah on Shabbos or Yom Tov (Orach Chayim, Chapter 51 and Chapter 281). Others explain that we recite Mizmor Lesodah to remind us of the korban todah, and since it was not offered on these days, there is no point in reciting it (see Pri Megadim, Eishel Avraham 51:11). Perhaps this is done as an aspect of uneshalma parim sefaseinu (Hoshea 14:3), “may our lips replace the bulls (of offerings),” which is interpreted to mean that when we have no Beis Hamikdash, we recite passages that commemorate those offerings. For this reason, the custom developed among Ashkenazim to omit Mizmor Lesodah on days that the offering could not be brought in the Beis Hamikdash.

Since the korban todah contained chometz, it could not be offered on Pesach. Therefore,  Ashkenazim refrain from reciting Mizmor Lesodah is omitted on Chol Hamoed Pesach for the same reason that it is omitted on Shabbos.

With this background, I can now begin to address the third question raised above.

Indeed, in this instance, the student is correct. Hopefully, the rebbe was not that badly embarrassed.

Mizmor Lesodah and our daily davening

In order to make sure that this thanks to Hashem takes place daily, the chapter of Mizmor Lesodah was introduced into our daily pesukei dezimra. We should remember that miracles happen to us daily, even when we do not realize it (quoted in name of Sefer Nehora; see also Beis Yosef, Orach Chayim 281). Although it was not part of the original structure of the daily prayers established by the Anshei Keneses Hagedolah, long before the time of the Rishonim it was already common practice to include it as part of the daily recital of pesukei dezimra and to say it almost at the beginning. The importance of reciting this psalm should not be underestimated. The Shulchan Aruch (Orach Chayim 51:9), states: One should recite Mizmor Lesodah with song, since eventually all songs will cease except for Mizmor Lesodah. This statement of Chazal is explained by Rav Hirsch (Commentary to Psalm 100) in the following manner: One day in the future, everything on Earth will be so ideal that there will be no reason to supplicate Hashem for changes. Even then, prayers of gratitude and thanksgiving will still be appropriate.