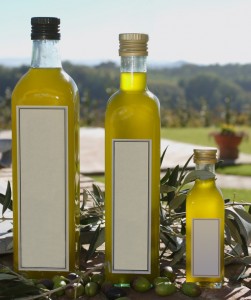 There are approximately seven hundred olive varieties, or cultivars, whose distinctive tastes and aromas are developed and marketed, just as viniculture develops distinctive varieties of fine wine. Specialty olive oil producers have mastered the methods whereby they breed, grow, and produce their oil. The highest quality olive oil is produced by painstakingly harvesting the fruit by hand to assure that it is not damaged, even though this method drives up the cost tremendously. Olives for quality oils are picked and milled within hours, to minimize oxidation and enzymatic reactions, which leave unpleasant tastes and odors in the oil and decrease its fragrant qualities. These bouquet oils, like vintage wines, compete among connoisseurs for their taste. These oils are the Rolls-Royce of the olive industry and are sold privately or in gourmet shops, similar to the way one would acquire vintage wines.

Olives are almost unique among oil sources, in that olive oil can be consumed in its crude form without refining. Almost all other edible oils: soy, canola, corn, cottonseed, peanut, palm, etc., require extensive refining using heat and chemicals to make the oil palatable. Furthermore, unrefined olive oil conserves most of its nutrients, whereas refining often destroys them.

Oil produced without refining is called virgin or cold-press oil. The term cold press can have many meanings, but in common parlance it refers to oil that is extracted without heating the olives or the use of chemicals. However, one should bear in mind that the term “cold press” actually has no legal meaning. Someone selling refined oil as cold press would be violating an industry standard, but cannot be prosecuted for violating the law. It is also important to note that the term virgin oil has no legal meaning in the United States, although there are many countries in the world where the term has a legal meaning. In those countries, someone selling refined olive oil as virgin oil can be prosecuted. However, someone selling refined oil as virgin olive oil in the United States is exempt from prosecution, either civil or criminal.

Virgin oil is not required to meet as high a standard for taste, but still has a positive taste profile, and can have an acid content of up to 2%.

Never heard of this? There is a reason why – either its taste is considered inferior or its acid content is greater than 2%. These are the Chevies of the olive industry. Usually, this oil undergoes further processing, which is called refining, to remove the excess acid and make it more palatable, and the resulting product should not be called virgin oil, but should be sold as “refined olive oil” or “olive oil” missing the adjective “virgin.” This is the type of olive oil that is used in canned sardines packed in olive oil.

The most inferior category of cold press or virgin oil is called virgin lamp oil, or sometimes by its Italian name – lampante. This is oil whose taste is considered inedible, and therefore will probably not be used for food, but more likely for kindling or other non-food use. This raises a very interesting observation, since the Torah was more concerned that the oil used for kindling in the Menorah in the Mishkan should be only of the highest quality and was less concerned about the quality of oil used to produce the korbanos mincha, the meal offerings. This curiosity is not lost on the Midrash:

In the custom of the world, if someone has bad oil, he kindles it, and his good oil he cooks with. In the Ohel Moed and the Mikdash, one did not do this. Only the purest oil went for lighting, and the second quality went for the menachos (Midrash Tanchuma, Tetzaveh 6).

The earliest authority that I found who discusses this issue is the Rashba, in his Toras Habayis (Bayis IV, Shaar I, page 28), the work he wrote, as the title suggests, as a handbook for proper household mitzvah observance. In his discussion about kashrus, he mentions the case where someone discovered a mouse in the oil he had intended to use for food, and whether this oil can now be donated to illuminate a shul. The Rashba compares this to the Talmudic discussion that results from the prophet Malachi’s (1:8) derisive rebuke: “And when they offer a blind animal as an offering, have they perpetrated no evil? And when they offer a lame or sick animal, is this not evil? And if they offered it to their idol, would he accept it or view it favorably?” We see from this verse that it is unacceptable to offer an inferior item in the Beis Hamikdash. The Gemara then derives from this verse that one may not use inferior items for Kiddush or to perform other mitzvos. One should use only quality items for serving Hashem, not items for which one has no other use. The Pri Megadim (Eishel Avraham 154:19) specifically includes the oil one uses for Ner Chanukah under this prohibition.

Regarding  our mouse in the cooking oil, the Rashba concludes that if the oil is halachically not kosher, one may not use it to illuminate the shul, similar to the prohibition against use of a sick or otherwise inferior animal as a korban. However, if the oil is halachically permitted to eat, such as when the rodent parts can be filtered out, one may kindle this oil in shul. The rationale appears to be that one is not attempting to pawn off inferior items by using them for a sacred purpose, which is the despicable activity that Malachi decried. When one could use the item for oneself, but chose not to, it is appropriate to use it for a mitzvah.

Other authorities prohibit lighting shul lamps with this contaminated oil, even when it is halachically kosher and one could eat it (Magen Avraham 154:19, quoting several earlier authorities). These authorities contend that serving Hashem with an item that one personally considers disgusting is prohibited.

Based on the above discussion, I have heard people say that one may not use oil that one cannot or would not eat, either because of kashrus concerns or because of health concerns, for Chanukah lights. It is very common to find olive oil sold as “not for human consumption,” or “for kindling only,” either because the solvents or other chemicals used to extract or refine the oil were not food grade, or because this oil was produced from inferior olives or in such a way that the oil tastes bitter, or the oil was prepared in a less than sanitary environment. Are we indeed required to purchase the far more expensive food-grade olive oil for the menorah?

One may argue that, in this case, the oil does not have a disgusting appearance, as opposed to Malachi’s lame and blind animals. The Shulchan Aruch (Orach Chayim 154:12) implies that it is a concern only if the oil appears to be disgusting: If you found a mouse in the oil meant for synagogue use, if it is disgusting, one may not kindle it in the synagogue.

In addition, Malachi’s lame and blind animals would be unable to be worked and therefore may have no suitable use other than being offered as korbanos ­­-– and perhaps this is exactly the prophet’s concern.

Whereas Shabbos and most of our holidays include festivities that we celebrate with the use of wine, on Chanukah, we celebrate the miracle that happened with the olive oil in the Beis Hamikdash. Many of our customs, including the consumption of doughnuts and latkes, are to remind us of the miracle of the oil.

It is interesting to note the many comparisons made between olives and grapes, and this also has halachic overtones. Both vineyards and olive groves are called kerem in Tanach and Mishnaic Hebrew (see Berachos 35a). Wine and olive oil are the only fruit products used in korbanos on the mizbeiach. They are the only liquids whose brocha is not shehakol, but is ha’eitz in the instance of olive oil, and hagefen for wine or grape juice. They both have the halachic distinctiveness of being the only fruit with a Torah requirement of separating terumos and maasros; and they are the only fruits that may be squeezed for their product when they have terumah sanctity.

On the other hand, there is an interesting technical difference between grapes and olives, one with major hashkafic ramifications. Whereas it requires much tending to coax the vine to produce quality wine grapes, the olive tree requires relatively little attention to produce quality olive oil. Once one has chosen the proper site for planting the trees, the main efforts required to produce quality oil are to harvest the olives exactly when they are ready and to crush them immediately without damaging them. Any delay reduces significantly the quality of the oil extracted. This is also reflected in the halacha, which rules that one may harvest and process olives on Chol Hamoed, when work is usually prohibited, because delaying causes major loss (Mishnah, Moed Katan 11b).

The root of the word Chanukah is the same as that of chinuch; both instances include the concept of training or the beginning of performing mitzvos. Thus, the true, correct translation of chinuch is not education, but training.  Similar to the grape, some children require constant involvement in their education. If you take your eyes off their chinuch for a moment, they will be in trouble. However, when you attend to them carefully and constantly, they’ll produce high quality wine. Other children resemble the olive. They require less overseeing. Once they are planted correctly, they will do fine if left to grow on their own. This is indeed a manifestation of the other aspect of chinuch/Chanukah. As parents and teachers, it is our task to understand our children and apply the correct approach to maximize the potential of each child. As Mishlei (Proverbs) tells us, chanoch lanaar al pi darko, each child needs to be trained according to his own specific requirements.

May the lights of Chanukah symbolize for us the dedication of our ancestors to guiding their children and students in the way of Torah, and serve as a beacon for us to continue in that mission.