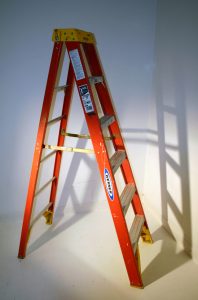 “What is the ‘maris ayin conundrum’?”

“Is there a traditional source for the modern Hebrew word magleisha, which means a sliding board or a chute, or the word miglashayim, which means skis?”

Since Yaakov Avinu witnessed the angels going up and down a ladder, it seems an appropriate week to discuss halachos germane to ladders. To begin, let us analyze a passage of Gemara that discusses ladders.

In our day of refrigeration and freezers, it is unusual for someone to shecht meat on Yom Tov. However, since the halacha is that one may prepare food on Yom Tov, this law permits not only kneading dough, chopping up vegetables, turning up a fire and cooking, but permits also shechting on Yom Tov. After all, freezing meat is only the second best way of keeping it fresh from spoilage. The best method is to keep the bird or animal alive, and this was common practice in the time of the Mishnah and Gemara. It was also the reason that, until the modern era, ships at sea kept a herd of livestock on board, to make sure that the crew did not starve on the high seas. (The British were also noted for keeping a supply of limes on board, but that was for a reason beyond the discussion of our current article.)

In this context, we find the following Mishnah (Beitzah 9a) regarding someone who is interested in preparing doves for his Yom Tov seudah: “Beis Shammai says that you may not move a ladder from one dovecote to another, but it is permitted to lean it from one window to another, and Beis Hillel permits (moving the ladder).”

The Gemara cites several approaches to explain the dispute between Beis Shammai and Beis Hillel. Two of these approaches, which we will call “approach #1” and “approach #2,” understand that the dispute involves the principle called maris ayin, the requirement to avoid raising suspicion that one is doing wrong. Beis Shammai is concerned that a person observing someone carrying a ladder on Yom Tov may think that the latter is taking his ladder to repair his roof, which is, of course, forbidden on Yom Tov.

The Gemara explains that everyone agrees that one may not carry a large ladder which would ordinarily be used for roof repair. Carrying such a ladder would entail maris ayin.  The dispute between Beis Shammai and Beis Hillel concerns whether one may carry a small ladder, more likely used for getting doves than for roof work.  Approach #1 contends that Beis Hillel permits carrying a small ladder in a private place, but not in public, whereas Beis Shammai prohibits carrying the small ladder even in private. This opinion understands that Beis Shammai and Beis Hillel disagree about the following principle: Is maris ayin prohibited only in a public place, where there is a greater likelihood that someone will misinterpret the action, or even in a private place, notwithstanding that it is unlikely that someone will see this action and will think that the carrier is planning to violate halacha (see Ran, Shabbos 146b; note that the Mishnah Berurah 301:165 appears to have understood this dispute in a different way)? Beis Shammai contends that maris ayin is prohibited, even when the act is performed in a private area, completely out of view. The Gemara calls such a private area, bechadrei chadarim, in the innermost room.

Some rishonim draw a distinction between a situation in which an observer might think that someone is violating a Torah law, as opposed to one in which the action being done in private would violate only a rabbinic injunction, in which case one does not need to be concerned (Tosafos, Kesubos 60a s.v. Mema’achan; Tosafos, Moed Katan 8b s.v. Umenasran). However, other rishonim do not draw this distinction (Rashba, Ran, Beitzah ad loc.). The accepted halachic authorities appear to follow the lenient approach, meaning that if the violation is only rabbinic one does not need to be concerned (Shulchan Aruch, Orach Chayim 336:9; Taz, Orach Chayim 243:3, 301:28, 336:9; Magen Avraham 301:56; Mishnah Berurah 301:165; Biur Halacha ad locum s.v. Bechadrei. See also Rema, Yoreh Deah 87:3,4; Pri Chodosh ad locum; cf. Rambam, Hilchos Shemittah veYoveil 2:1; Shach, Yoreh Deah 87:6,8).

I want to call attention to the fact that the concept of maris ayin is a fascinating curiosity, because it contradicts another important Torah mitzvah – to judge people favorably. This mitzvah requires us to judge a Torah Jew favorably when we see him act in a questionable way. (For further information on the mitzvah of judging people favorably, see Shaarei Teshuvah of Rabbeinu Yonah, 3:218.) If everyone judges others favorably at all times, there should be no reason for the law of maris ayin. Yet, we see that the Torah is concerned that someone may judge a person unfavorably and suspect him of violating a mitzvah. Indeed, a person’s actions must be above suspicion; at the same time, people who observe him act suspiciously are required to judge him favorably.

At this point, we can now answer our opening question: “May I use a ladder on Yom Tov?” The answer is that I may not use a large ladder that is used primarily for climbing onto a roof, even if I have a reason to use it on Yom Tov that would, otherwise, be acceptable. It is unclear from the Mishnah and Gemara whether or not I may use a smaller ladder.

At this point, let us address a different one of our opening questions:

“Is there a traditional source for the modern Hebrew word magleisha, which means a sliding board or a chute, or the word miglashayim, which means skis?”

The word magleisha in modern Hebrew, which means a chute or slide, is based on a posuk in Shir Hashirim (4:1), where we find the following accolade: “Your hair is like a flock of goats that descend (Hebrew, golshu) from Mount Gilead.” The book of Shir Hashirim is full of allegories that are to be understood on many levels. Often they express, poetically, the bond between Hashem and the Jewish people and also can be explained on a literal level, as depictive of the relationship between a man and a woman.

Har Gilad, or Mount Gilead, is today in northwestern Jordan on the eastern side of the Jordan River, but was part of Eretz Yisroel at the time when Shlomoh Hamelech wrote Shir Hashirim. Of course, the obvious question in understanding this posuk is – why are we complimenting someone for hair that appears like descending goats? According to Rashi, the accolade is as follows: Your hair has a beautiful sheen to it, similar to the white sheen that one sees from a great distance when observing a flock of white goats descend the mountain.

Seforno interprets the idea of the posuk in a way similar to what Rashi wrote, but there is a difference in nuance between their two interpretations. Seforno writes: “Your hair is fine as the cashmere on the back of the heads of the goats of Gilead.” In his opinion, there is no reference in this posuk at all to descent, gliding, or sliding. Similarly, ibn Ezra understands that the word golshu means “as they appear on Har Gilad.”

According to Rashi, the word golshu carries the connotation of “descent,” whereas according to ibn Ezra and Seforno, it does not. Thus, according to Seforno, there is no basis to explain the root גלש as having anything to do with descending, sliding or skiing. Even according to Rashi’s interpretation which provides a source that the root golosh גלש means to descend, there is still quite a stretch to get the word to mean slide, glide, ski, or chute. However, as any linguist can attest, Modern Hebrew has taken many Hebrew, Aramaic or even English and Arabic words and given them meanings quite distant from their origins. However, the root גלש has been used for all of these meanings, and we are therefore left with Modern Hebrew terms such as magleisha, sliding board or chute, miglashayim, skis, and various other similar words. Do they have a traditional source? According to Rashi, perhaps; according to ibn Ezra and Seforno, they do not.

The gematria of the word sulam, Hebrew for ladder, is 136, which is the same gematria as that of the words tzom (fast), kol, and mammon. This certainly brings to mind the piyut, Unesaneh Tokef, that we recite on Rosh Hashanah and Yom Kippur, in which these three words are inserted in small letters in the machzor above the words teshuvah, tefillah and tzedakah, when we declare that they protect against harsh decrees. Teshuvah, tefillah and tzedakah demonstrate different steps a person must take to bring himself closer to Hashem. This is symbolized by the ladder, as we ascend one step at a time to bring ourselves closer to serving Hashem.