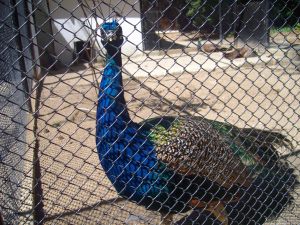 Question #1: Checking inside the eruv

Question #2: Shabbos in a warehouse

“May one carry in a warehouse on Shabbos?”

Question #3: Do people live in the zoo?

What do the previous two questions have to do with the title of this article?

One may carry inside such an area only when it is no larger than 5000 square amos (Mishnah Eruvin 23a), which equals approximately 1000* square meters or 10,000-11,000 square feet. For the balance of this article, I will refer to an area larger than a beis sasayim, that is, one that contains more than 5000 square amos, as a large area, and any area smaller than this as a small area. There is another factor that must be met to permit carrying in a small area that is not enclosed for residential use – its length may not exceed twice its width by more than one amoh (Mishnah, Eruvin 23a).

We will now continue our topic from where we left it last week.

If a body of water, such as a lake or stream, is within an enclosed area, is the area still considered mukaf ledirah? Similarly, if an area was mukaf ledirah and then became flooded, may one still carry there (Eruvin 24a-b)?

On the one hand, since people do not live under water one could argue that any area covered by water is, by definition, not suitable for human habitation. On the other hand, mankind cannot survive without water; a nearby source of potable water is definitely a residential need.

The halachah is that water covering the ground does not usually create a problem, but there are three factors to be considered:

The quality of the water – can people use it?

How large an area is covered by water?

How deep is the water?

If the water is deep, not usable and covers a large area (more than 2500 square amos), that area is not mukaf ledirah, and the enclosures surrounding it do not permit one to carry there.

What is meant when we say that the water is usable? This issue is a subject of dispute among both early and late halachic authorities. There are two basic approaches, a stricter approach, which defines usable water as being drinkable (Rashi, Eruvin 24b s.v. Dechazi), and a more lenient approach, which rules that water suitable for laundry and similar uses is considered usable (Rashba, Avodas Hakodesh, Beis Nesivos 1:14:90 and 3:3:144; Ritva, Eruvin 24a).

In today’s world, this dispute would, seemingly, have a very common application. The run-off from rainstorms in suburbia crosses fertilized and pesticide-treated lawns. This water is definitely unsafe to drink. As a result, water accumulating to an appreciable depth over a large area could invalidate an eruv. However, when the water looks clear and is therefore suitable for laundry use, the Rashba would rule that it would not invalidate the eruv, even if it is deep and covers a large area. Thus, whether this water invalidates the eruv should be dependent on the dispute between Rashi and the Rasha.

What does one do if there is an area of land covered by water in a way that it has the halachic status of a carmelis? The halachah is that, as in the instance of other areas that are not mukaf ledirah, carrying is prohibited in the adjacent residential area only when the area covered by water is not separated by a mechitzah. For example, a stream that contains unusable water runs through an area surrounded by an eruv. Does this render the entire eruv pasul?

One possible solution: To construct a tzuras hapesach that separates the prohibited area from the permitted.

A second possible solution: If the banks of the stream are sufficiently steep, these banks themselves serve to divide the water area from the eruv area and no further adaptation is necessary.

At this point, let us examine the first question I noted above:

We now are equipped to answer this question. Indeed, if the area within the eruv includes a large area that is planted or contains non-usable water, that area must be cordoned off from the eruv area in a halachically acceptable fashion. This requires essentially creating some type of halachically-approved divider. Otherwise, the eruv is invalid, and one may not carry there.

Thus, even if an eruv’s perimeters somehow, miraculously, survived the onslaught of a hurricane of the magnitude of Sandy, one will still not be permitted to carry within the eruv if there are areas of deep, unusable water that are more than ~5500 square feet.

Planting and the city eruv

Some authorities rule that planting an area is less of a problem in a city eruv than it is in someone’s private area. This is based on the reasoning, mentioned in the Gemara, that planting in a karpif invalidates an individual’s residential “wall.” However, if an entire city was enclosed, the planting of one individual cannot invalidate the enclosure. (Shu’t Dvar Shmuel #259, who introduces this approach, described planting which, by its nature is temporary, inside a city wall. It may not follow that this can be compared to a modern city and its eruv.) There are authorities who dispute this approach and rule that planting invalidates any type of enclosure (Maamar Mordechai 358:14; Chazon Ish, Orach Chayim 88:25).

Does an overgrown area invalidate an eruv?

The late authorities debate whether only a planted area invalidates an eruv, or even an area that becomes overgrown on its own. I leave this question for the local eruv committee to discuss with its halachic authorities.

Do people live in the zoo?

The preceding discussion about mukad ledirah serves as an introduction to understanding the question, “Do people live in the zoo?” a practical question that was raised as early as the eighteenth century. The author of a series of scholarly Torah works, the Ohr Chodosh, Rabbi Elazar ben Elazar, sent a halachic inquiry to his mechutan, the Noda Biyehudah, Rav Yechezkel Landau, the chief rabbi of Prague. Where the Ohr Chodosh was then rav, in Cologne, there was a menagerie of wild animals within the area that they wanted to include within the town’s eruv. Based on his analysis of the dfference between the cases that are considered mukaf ledirah and those that are not, the Ohr Chodosh wanted to permit the zoo area as mukaf ledirah. He begins his analysis with the question:

Why is a vegetable garden or wood storage area considered non-residential, and yet an area in which animals are penned (a dir) is treated as residential?

The Ohr Chodosh, himself, felt that the dwelling of an animal is considered a residential use, and that this is true even regarding the dwellings of wild animals. Therefore, if someone builds a zoo with enclosures for the tigers, lions, bears and other species, each enclosure has the status of mukaf ledirah and can be more than a beis sasayim without prohibiting carrying.

A different scholar, identified in the responsum simply as Rabbi Nissan, disagreed with the Ohr Chodosh, contending that animal pens are considered mukaf ledirah only when they include a hut or other type of residence where the shepherd lives. He notes that Rabbeinu Yonasan, the major commentary on the Rif on Eruvin, mentions this distinction. The Ohr Chodosh retorted that he found this restriction, that a dir is considered mukaf ledirah only when it contains a residence of sorts for the shepherd, in no other halachic source, and therefore concluded that Rabbeinu Yonasan’s ruling is a minority opinion. The Ohr Chodosh contended that most authorities would accept his analysis.

On Rosh Chodesh Nisan 5548 (1788), the Noda Biyehudah answered the letter of the Ohr Chodosh, siding with Rabbi Nissan. Although the Noda Biyehudah agrees that the other authorities may not accept Rabbeinu Yonasan’s requirement of a guard hut, the key difference between a dir and a vegetable patch is that a dir requires a human presence, whereas a vegetable patch does not require a human presence. The Noda Biyehudah contends that an enclosure for wild animals will not be considered mukaf ledirah, and will be prohibited if the area is more than a beis sasayim, since people do not dwell among wild animals.

In his responsum, the Noda Biyehudah does not discuss what is the exact difference between a dir and a ginah, but other authorities do. The Tosafos Shabbos explains the difference to be that a dir is used by people at night, whereas a ginah is used only during the daytime. The Biur Halachah explains the dissimilarity in a different way, contending that a dir is adjacent to the house, and includes milking and other uses that are domestic. Therefore, its use is incorporated with the use of the residence.

Based on this discussion, one can ask whether a warehouse, larger than a beis sasayim, that does not contain any type of residence, is considered mukaf ledirah. The use of a warehouse is not domestic and therefore could be conceived as not mukaf ledirah.

This question involved a dispute between the Mishnah Berurah and the Chazon Ish. The Mishnah Berurah holds that since a warehouse is a strongly constructed building, it qualifies as mukaf ledirah, regardless as to why it was constructed and how it is currently used. The Chazon Ish challenges this position, insisting that unless a structure includes some place to be used for sleeping, it is not considered mukaf ledirah, unless it meets one of the categories that the Mishnah or Gemara qualify as mukaf ledirah.

The dispute between the Mishnah Berurah and the Chazon Ish should affect only the status of the warehouse itself, and that only if it is larger than a beis sasayim. However, since a warehouse is completely enclosed its status will not prohibit an adjacent area. Thus, the area within the eruv surrounding the warehouse will remain unaffected by its status.

The Aruch Hashulchan notes that shuls, batei medrash and bathhouses are all buildings whose purpose is not for residential purpose. One is not permitted to use a shul or a beis medrash for personal use, and a bathhouse is also not used for typical residential use. The Aruch Hashulchan therefore concludes that all of these areas do not qualify as mukaf ledirah, unless they include some type of residence for the building’s caretaker.

Rav Samson Raphael Hirsch (Shemos 20:10) notes that people mistakenly think that work is prohibited on Shabbos in order to provide a day of rest. This is incorrect, he points out, because the Torah does not prohibit doing avodah, which connotes hard work, but melachah, which implies purpose and accomplishment. Certainly no more calories are expended when carrying from a reshus hayachid to a reshus harabim than when carrying a heavier item a greater distance within a reshus hayachid; yet, the first activity desecrates Shabbos and the second is permitted.

The goal of Shabbos is to emphasize Hashem’s rule as the focus of creation by refraining from our own creative acts (Rav Samson Raphael Hirsch Commentary to Shemos 20:11). Creating a beautiful Shabbos entails much planning and organization, realizing that preparation for Shabbos includes studying all the melachos of Shabbos. This helps us have a greater appreciation of Shabbos, and to get the maximum joy out of this special day.

* The measurements used in this article are meant only for rough calculation.